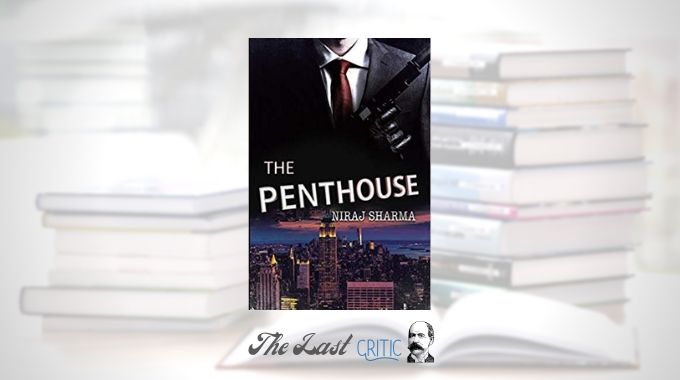 The Penthouse is a title written by Niraj Sharma, an Indian author who lives in Canada at present. The novel was published in 2019 globally and a special Indian edition was published by Ashvamegh Publication. The novel has 255 pages and it begins with Vito Ricci, the protagonist of the novel, looking ambitiously towards his future. He comes from a poor background and wants to become rich – is that the flaw? You will know later. Written in a plain and simple English, the novel is inspiring at times and also rigid at times. You can read it but that will not be possible in one sitting. You may have to engage with the novel two or three times to read it. Now, let’s move into the content of the novel.

The novel has a certain beginning and a gradual development of the plot. It does not move as fast as you may have seen other crime fiction novels changing scenes rapidly and entering into the conflict zones. Here, in The Penthouse, the story is very much within the walls. Niraj Sharma may have had different ideas in his mind when he wrote this novel. Vito rises vertically in the world of crime and poses like a real estate developer in front of his family and his wife (eventually) Alicia. The Penthouse may be an extrapolation of his personal ambition – high, huge and emphatic.

Days change in the novel like pages in a book. Everything begins in the morning and moves to a conclusion by the end. Vito’s ventures into the world of crime and narcotics in Italy first. He is promoted to expand the business in Italy and rises there as well. However, with the rise in corruption in one’s heart and mind, rises the number of enemies outside. The same happens with Vito and he feels trapped in the cobweb of crime. His marriage with Alicia brings a momentary respite to his life but he is finally at the peak of his criminal ventures and taken away by the FBI. Will he survive this? Why is there violence at the end? Does Vito Ricci see his people die? Will he himself be alive to see that side of the ocean?

Many questions like the above will be answered when one goes through the novel. It has many flaws and many peaks. It reads like a ride which has highs and lows more often. Uniformity is lacking but it makes the novel interesting. The set-up in the USA is largely confined to the Penthouse that only has (it seems) Vito, Alicia, and others in the gang of Vito.

I would recommend this novel to the readers who are a little composed and have the patience to wait for the plot to unfold. It takes time for the storyline to come into a certain shape from where it could take off and the readers can see things happening in quick successions. Though the plot has very limited scope to widen its reach in terms of more characters and further subplots, The Penthouse has an effective theme to deal with. It moves deeper into the criminal rather than exploiting only the crime committed. And therefore, the novel will likely influence the readers who are not strictly from the hardcore crime fiction readers. However, at the same time, the readers of crime fiction who want to see vengeance and crime unfolding just after the beginning might feel a little down by the nature of this novel.

You can get a copy of this novel by Niraj Sharma from Amazon India by clicking the link below:

Review by a contributor to The Last Critic

This is a crime thriller novel that is new to the Indian readers because it is gross in sentimental agony rather than crime and thriller. It has the elements of a crime thriller only at the end of it…

#Crime#Indian
Help others read this... do share!
You will enjoy reading these:

Deepak Kripal's novel Sense of a Quiet is based on human emotions, fragile yet tangible,…

Preety has been superbly artistic in dealing with the theme that is romantic, realistic, social,…