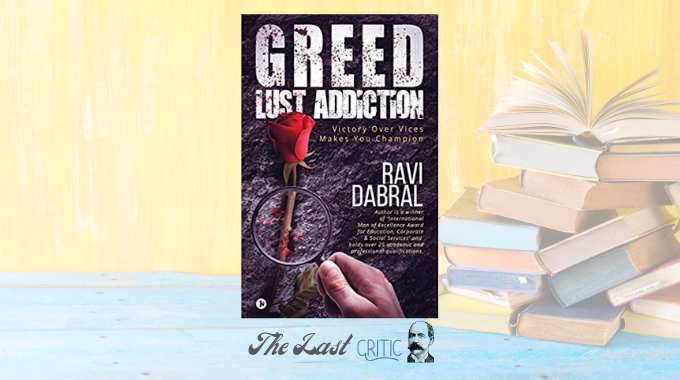 Greed Lust Addiction by Ravi Dabral is one of those novels published in the year 2019 those could meaningfully deploy one major theme and one inner layer of idea successfully. The book was also the debut novel by Ravi Dabral which became very successful among the serious readers as well as the readers of thriller and crime-thriller fiction. A national bestseller, the book established Ravi Dabral as one of the best crime thriller novelists in India as well as at the fore of the line that limits the novelists who are loved by the readers who look for literary elements in the modern Indian English fiction. My name is Jagdish Sharma and this is my review for the novel Greed Lust Addiction.

The paperback edition of this novel has 306 pages with additional pages for introduction and acknowledgement and other details in the beginning. The novel has 51 chapters and two epilogues. Titles of the chapters are kept very apt, in synchronisation with philosophical ramifications. Ravi Dabral has tried to inject a pleasant dose of a spiritual quest into the narrative of Greed Lust Addiction that keeps it from becoming a dry crime thriller. I will detail more about it in the next section. Moreover, the novel has a quality cover that tries to portray thorns in the rose stick which can only be seen aptly if you have an eye of renunciation. Let’s get into the content of this spiritual crime-thriller novel.

Vijay and Seema are the leading characters that readers meet in the first half of the novel. In the second half, readers meet many other characters. One central character, Suraj, is introduced to the readers through a diary narrative in which, as Vijay reads, many things about the life of Suraj are revealed. The basic plot of the novel consists of an investigative journalist’s excursion into the cobweb of corruption in politics and the alliance of corrupts in media, politics and bureaucracy. Eventually, Suraj is killed (seems so unless Vijay reads the diary) and the corrupts think they have won the battle. Suraj reappears on the scene but he is a changed man who does not want simple revenge but he wishes to fight for the causes in a democratic way under the guidance of Guru Ji, an enlightened man who runs an Ashram that teaches people self-control and various spiritual lessons. The second part of the novel is more mature in terms of narrative and storyline.

The novel will be interesting for the readers who are patient enough to read these 300-odd pages and keep understanding various layers of narrative. Otherwise, if you let loose your connect with the novel and read it in fragments, the novel might seem wayward and confusing. So, you need to read it page by page and with patience.

On the technical part, the novel has a very simplified language that will allow anyone with basic knowledge in English to read this novel pleasantly. Greed Lust Addiction is not an unnecessarily-eloquently penned novel with flowery words and highly intellectual diction. It is a simple novel with deep ideas… in short!

Greed Lust Addiction is a novel that will be enjoyed by youths as well as mature readers. It has something for everyone. Spiritual ideas unfold throughout the novel. It begins to unfold rapidly with questions and answers on the soul, karma, Gods and various other religious aspects. Guru Ji, as a character, binds the first part of the novel with the second and it is he who aids to the transformation of Suraj from a revenge-laden mind to an extremely clever social reformer with a vision.

The readers can get a copy of this novel from Amazon India by clicking the link below.

review by Jagdish Sharma for The Last Critic

Buy Now
Post Series: Best of 2019
#Contemporary#Indian
Help others read this... do share!
You will enjoy reading these:

The Memoirs of a Nobody by P. Sam – Novel Review

The Memoirs of a Nobody is a recently published novel authored by P. Sam. At…