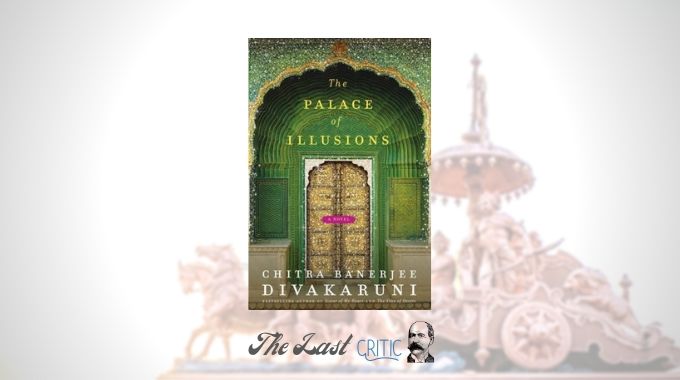 The Palace of Illusions, a novel by Chitra Banerjee Divakaruni, is a perfect recipe for anyone who is an aspiring novelist and wants to make something happen. There a few very simple steps that a novelist-to-be needs to follow in order to make something like Chitra’s work happen once again:

Okay, jokes apart, let’s consider the work by Chitra Banerjee seriously. Though her boring and repetitive and too naive language would seldom let someone take her novel seriously, let’s assume it’s serious. The Palace of Illusions, very much related to its title, is a work that describes Mahabharat, Indian history, from Draupadi’s perspective. Well, that is indeed a noble cause. Only until a fancy thought competition begins, it seems, and the author starts hallucinating in her wilderness – terming it as Draupadi’s and putting the entire blame on a ‘fictional’ character’s shoulders. If you can relate, the same hallucination struck Anand Neelakantan and his thoughts and he began chanting Ravan’s rescue mantra without any logic or any scanty chance for clarity of thoughts to prevail.

“In a society that looked down its patrician nose on anything except milk-and- almond hues, this was considered most unfortunate, especially for a girl.”

The greatest problem with the feminism of the elite writers and thinkers is that they create problems on their own and they try to champion the cause but miserably fail to convince people about the entire process. Draupadi thinks within herself, without inverted commas, that the society then (in the days of Krishna and Arjuna; Kunti and Uttara; Bhishma and Vidur) preferred to indulge in racism. However, she will not be answerable to any of the queries you may have because she will skip with the banner of ‘fictional freedom’. Is there any proof of racism in those days? No. Well, let’s settle with this one. Let’s move ahead to hear what our beloved, oh, Chitra’s beloved Draupadi has to say.

Draupadi of Mahabharat, Panchali, the Divyajanma, the Krishneya… she was an embodiment of valour, sacrifice, devotion and devatva, the divinity. Draupadi in The Palace of Illusions seems too shaky, unconvinced of herself, uncontrolled in her thoughts and naive in her emotions. Why did the author do so? Was she deliberately creating a weak Draupadi?

The novel has another striking and notorious feature in terms of Draupadi’s attraction for Karna. Though it was never there, yet, let’s give the author a creative license of use her imagination and forcefully inject it into the veins of her plot that is so poorly managed to accommodate ‘her’ Draupadi’s ambitions, imaginations and thoughts. Just to put things to a position from where the readers can see things in clarity, do you remember the novel Chanakya’s Chant by Ashwin Sanghi? He has also worked on Indian history but that was a work that did not play with the ‘inspiration’ very much. The novel almost deviates to an extent that Draupadi seems to harbour disgust for Krishna and Pandavas just for the author to be able to juxtapose Darupadi’s secret love, almost penchant for Karna’s touch on her body. Anyone who has read or has knowledge of Mahabharat would find it highly confusing.

“I focused instead on his hands, the wrists disdainfully bare of ornaments, the powerful, battered knuckles. If my brother had known how badly I wanted to touch them,”

The entire spectacle of Arjuna surprising everyone during the Swayamvar has been reduced to a fancy Karna-Draupadi drama that could make any reader confused because of the senseless, unaesthetic and disintegrating writing style of the author. Arjuna’s heroics have been reduced to an idiotic episode that could easily have been avoided. And surprisingly, Chitra Banerjee Divakaruni, has enforced ‘her’ naive hatred against the Pandavas and especially Arjune in the novel very childishly and it creates further problems for the readers.

“I stared at the man striding ahead, the cheap white shawl that covered his wiry back, and wondered if he was who I suspected. An hour ago I’d put a wedding garland around his neck.”

With these emotions for Arjun, Draupadi begins the prolonged feeling of regret that she desperately show for a long part of the novel for not marrying Karna. This might make the readers feel very confused, almost furious and fumed, and more disgusted because the author’s own sympathy for Karna cannot hide behind the veils of Draupadi for long. Even during the Dyut Krida or the Chausar episode, touted as the game of dice in the novel, Draupadi’s very confused notions that Karna should (and others) see her naked… blah blah blah! I mean are you serious Chitra? Which chapter of feminism for dummies have these important lessons?

Draupadi’s (not the legendary Draupadi but the confused one created by this novelist for The Palace of Illusions) childish analogies come very far from logical grounds, breaking all the possible boundaries. On one hand, she admires Karna for being strong and masculine. However, on the other hand, she has (almost) disgust that Arjun did not give in to the sexual demands of Urvashi, the apsara of Indra. Srimad Bhagavad Gita explains that our duty is the morally, Karmik and religiously bound to us. However, in the fantasy land this lady novelist lives, Arjuna should have given in to the seduction of Urvashi just because her ‘breasts and navels were undeniable enough’ for anyone in the universe. And Arjuna not deviating from his course has to face this naive, childish and nincompoopish criticism from his wife, Draupadi.

“Against the sharp metallic seduction of instruments of death, what chance did Urvasi have?”

Well, one thing is very clear and I would bring it to the attention of my readers on The Last Critic that I enjoyed reading the novel because it gave me wonderful moments of laughter… laughter unchallenged by anything else. However, there were also the moments that were deliberately inserted into the storyline just to suit certain propaganda. Krishna’s character has been played with very badly in this novel. Though creativity has its freedom and it gives you the rights to work around the way you want, there should be some degree of respect for the characters you are venturing into. However, Chitra’s pen knows no boundaries. She can create a fusion in her imagination that Krishna was secretly harbouring some sensual desires for Draupadi…

“Heat rose to my face. Did Krishna want to be one of my suitors? I’d never thought of that possibility.”

Though this was a critical boiling point for me, I continued reading this novel because it would be against the book critic’s chivalry to leave a work unread, midway, uncared and rejected. Nevertheless, without wasting any more minutes dragging this book to different sections of its breadth and length, let’s come to the points straight away:

Dear readers, this was my experience with the novel by Chitra Banerjee Divakaruni and unfortunately for me that I read it and wasted a few important hours of my life on this work of fiction. However, at the same, it is very fortunate for you all that I read it and you have been saved from making the same mistake. So, it would be wise if you skip this work and engage yourself in other works of fiction or, if you haven’t read the original Mahabharat, it’s the time you should read that one so that you can enjoy the original without any mask and filters. All the best!

Review by Amit Mishra for The Last Critic

The Palace of Illusions

Buy the Novel
Post Series: Novels to Avoid
#Fantasy#History#Indian
Help others read this... do share!
You will enjoy reading these:

The Realm Beyond The Mind: Meeta J Gupta – Book Review

“It is her journey. Let her learn through her own experiences. It takes courage and…

In the Sphere: Lakshmi Raj Sharma’s The Tailor’s Needle takes us back to history when India was…