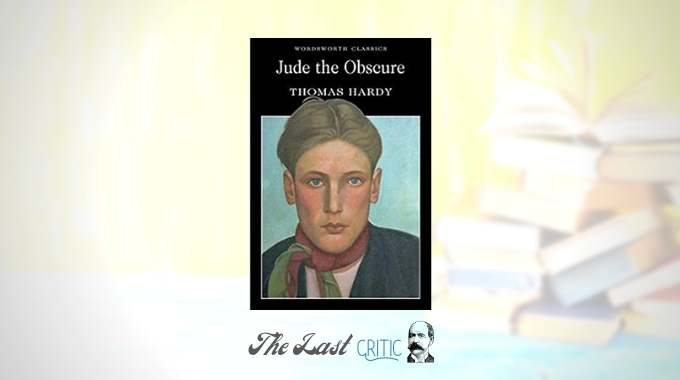 Thomas Hardy’s last completed novel, Jude the Obscure, was also perhaps his very first attempt at writing something beyond his usual periphery of pessimistic, silent and prolonged love-goals. Still, his attempt could not bring much of the difference that could distinguish his approach. Moreover, Jude the Obscure also got lost in the same web of pessimism and loneliness. Jude has the same fate as most of the heroes of Hardy but his agony doesn’t find the equaliser that we see with Oak and Dick. Let’s have a detailed look at the title of Thomas Hardy and we will learn more about available perspectives that we can use to construe this novel.

Jude the Obscure was first published in 1895. The edition I read was a 1995 edition published by Wordsworth Editions. Running up to 416 pages, the book has 6 different parts. The parts are based on the names of the places. The novel follows the life of a young man Jude Fawley. Jude is a dreaming personality who wants to become a learned man, a scholar. He wants to further his intellect and thus, wants admission into the university at Christminster. Christminster, scholars agree and it seems valid, was a city that Hardy modelled on Oxford. When Jude reaches Christminster, he meets his cousin, Sue Bridehead, who is an open-minded woman with a free spirit. Eventually and naturally, after the initial reluctance in their approach, these both cousins fall in love – a love that was considered forbidden at that time (and today as well). However, with the entry of Jude’s teacher, Mr Philloston, changes everything. In an apparent hurried manner, Sue marries Philloston but with her reservations and complications that do not allow the marriage to continue happily. Eventually, her return to Jude and her fear of having sex going away with time compel Jude and Sue to live aloof from the social set-up and they lead a life that is much more like that of nomadic people – going from one place to another because society won’t accept their ‘illicit relationship’. Jude and Sue have two children from their illicit relationship and one supposedly from Arabella (Jude’s wife whom he divorces). The novel takes very grave and sentimental turns, as you might expect a Hardy’s piece to do, and the readers are often rendered into metal boxes oozing tears, magically.

The novel has a wonderful narrative. This is something that comes by default in the works by Hardy. Accept it or not, when we look back to the best novelists who decorated the history of English literature, Hardy is always there with his impactful, persuading and pleasant language. His way of handling the language and letting it flow to create a magical impact upon the mind of a reader is just astounding.

“… As she read the four-square undertaking, never before seen by her, into which her own and Jude’s names were inserted, and by which that very volatile essence, their love for each other, was supposed to be made permanent, her face seemed to grow painfully apprehensive.”

A constant idea that overpowers the readers throughout the novel is that though Sue is in love with Jude from her head to toe, she is afraid to accept that because she begins to fear an uncertain identity named God. The novelist tries hard to play from Sue’s side and make the readers believe that Sue is against ‘marriage as an institution’, a famous phrase for the Victorian novelists, but not against her love for Jude… these complications make the novel further intense.

And you might have guessed, usual for Hardy’s Heroes, Jude’s fate is sealed with a state of disparity eventually leading to his death. He loses his children. He loses his reputation. He loses his sinister wife Arabella, good for him. And he loses his love in the form of Sue Bridehead as well – the ultimate push that brings him down into the valley of darkness that he cannot fathom and gives up to the idea of freedom to his soul in woe. This might make a case for those critics of Hardy who believe that his novels were pessimistic in nature and negative with most of the conclusions. It seems valid as well. However, unless devastating it be, the readers might not have felt an affection and repentance for Jude as they feel now. So, this might be considered as a victory gambit by Hardy in the last completed novel by him…

Thomas Hardy’s reputation as a novelist might not have been affected even if he decided not to publish his last novel, Jude the Obscure. Still, that he did it is a testimony to his dedication to doing something that might give the readers of his time and times to come something to ponder and something to conjecture. Not only his readers, but his critics also have more than enough just because of the publication of this one novel. Jude’s fate and Sue’s reluctance might be the fodder that the traditionalist may use for their validity to ensure that incest should never be a part of society. However, free thinkers like Freud and free-spirited novelists like D. H. Lawrence have high praises for Thomas Hardy for this novel… So, this is a road that has always two lanes.

Jude the Obscure will be remembered for its brilliance in bringing about a thematic shift from usual romance to an impossible romance that might never be. Still, Thomas Hardy pursued it. The novel has relevance even today. Can the society see love only with a single perspective of sexuality? Can society never raise its standards above the usual? Thomas Hardy has left many questions for his readers as well as his critics to answer. English Literature will always owe him for this. Even the most vociferous critics of him would agree that Hardy had a unique, sober and most distinct impact upon his readers and that was the only reason he could stay afloat in two different centuries and remained relevant as well.

The readers who want to read a novel that could dare to break free from the accepted trends in a time when there were strict impositions (unacknowledged) upon literature, could easily go for Jude the Obscure and they will never regret their decision. This is a novel that will be evergreen forever. You can get a copy of this novel from Amazon India by clicking the link below:

review by a contributor to The Last Critic

Jude the Obscure by Thomas Hardy

Jude the Obscure by Thomas Hardy is a novel that was way ahead of its time and the time when the novelist was active. It traces the life and events in the life of Jude Fawley and Sue Brideheard, cousins who fall in love.

Deepak Kripal's novel Sense of a Quiet is based on human emotions, fragile yet tangible,…