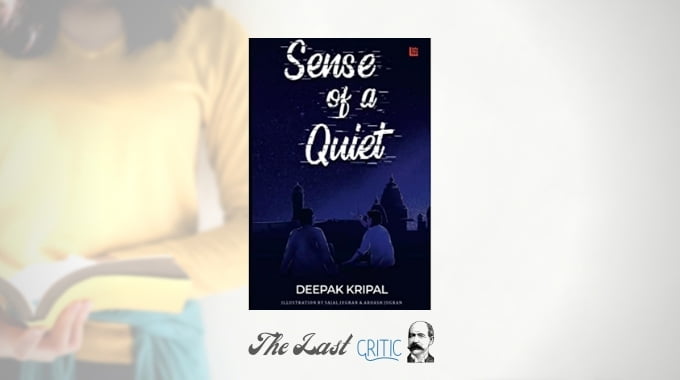 Deepak Kripal’s novel Sense of a Quiet is based on human emotions, fragile yet tangible, thoughts, weary yet prudent, actions, hurried yet determined. The novel’s preface announces in bold that a good story must concern with true human issues and emotional breakdowns, humane struggles are some of them. Sense of a Quiet beautifully carves out these things on a plane humane path circling the divine and purging flows of Ganga, the city of Mahadev, Haridwar and hills of this mystic city that devour human emotions like nothing. Impressive attempt, albeit a little tediously prolonged, Deepak Kripal has done his best in narrating the story of failure and resolve and the perpetual cycle of the same that keeps humanity on its feet even after so many setbacks.

The story is mainly revolving around three characters, Milind and Diya, the doctor couple, and their common friend, Rohan, who has his own emotional and real-life struggles. Rohan is having troubles in his marriage and he decides to take a break and visit Diya and Milind in Haridwar. Things are good. Milind, despite his unwanted mental tussle with his mother-in-law, shares a good and wonderful relationship with Diya. Rohan’s search for hope and peace takes him to the streets of Haridwar and also to the ghats on a regular basis where he puts up ‘not planned’ tussle with the local MLA and MLA’s gurgas. The matter comes to the lives of people and murders do happen… even Milind and Diya have to party in the state of affairs without their will. That’s for the story to unfold.

The novel is primarily based on conversations rather than actions. Actions are there but too slow to muddle with the philosophical, nostalgic and emotional conversations that break out anywhere, between any set of people. Rakesh, a rickshaw puller, and Rohan have these conversations on plenty. The novel also throws light on the functioning of the world in the true sense – inside government offices and under the table, over the carpet, below the belt and the arm-twisting that takes place when it comes down to the rich versus the poor or the mighty versus the weaker. The novel also has many scenes of human weaknesses. Rohan has several of the moments that we can call swaying of the conscience. Diya and Milind also have their fair share of such conscience shaking moments. Rakesh too has a few of these moments. Though the novel does not throw any judgments or definite conclusions, readers will surely make their own conclusions out of it.

The troubles and pleasures of Rohan are at the centre of the actions (if we count all that Rohan does as actions). Rohan’s relationship with the housemaid of Diya, Sapna, is also illustrated in wonderful colours.

The novel, overall, is an offering with a manifold of content. It is more abstract in nature and that can be justified when a reader will read the introduction to the author at the end of the novel. Deepak Kripal has tried to portray human emotions and human life in its true colours without making someone a hero who can achieve things in the blink of an eye. The novel doesn’t offer a superhero story but just the story of common men and women struggling on their way.

Technically, the novel is slow and it loses the uniformity of grip on its readers. At times, I felt like the story will go fast and instantly it comes down where I was. It might be due to the lack of characters or lack of scope for the characters to perform because of the story’s limitations. However, if you stick to it and reach the last page, you will find that Diya and Milind realise things that they did not do throughout. And yet, it remains insufficient… Sense of a Quiet prevails…

Review by Amit for The Last Critic

Sense of a Quiet by Deepak Kripal is a contemporary novel that offers a dip into human emotions… a little long to read quickly, the novel offers no certain resolve but a way forward for those who want to walk the path!

Are you looking for the next good book for your 12-year-old child? Do you want…