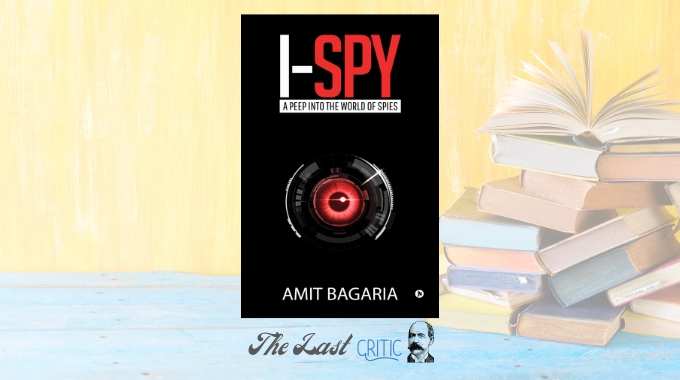 I-Spy is a non-fiction title written by celebrated Indian writer & newly launched novelist Amit Bagaira. This is one of a kind book that takes the readers into the depths of a spy’s life. More than that, the book takes the readers into the cobweb of secret intelligence missions carried out by the intelligence agencies around the world and the details about agencies have been given in an order prescribed by the author himself – from the ablest to the least able. So, what more a reader can find in the book by Amit Bagaria – I-Spy: A Peep into the World of Spies? I am Naman Singh for The Last Critic and I will review this title for our readers.

I-Spy first published in 2019 by Notion Press and was distributed worldwide for the readers who are interested in knowing more about spies, national spy agencies of many countries and other basic and secret and inner details of a spy. The book is bulky and it has about 450 pages with extra 40 pages dedicated to reviews and praise for this and other books by Amit Bagaria. The book has illustrations, representative graphics and various other pictorial details that support the content very well. Hardcover book is the most attractive edition while the paperback and Kindle editions are very sufficient to be read and enjoyed. More about the book (critically) can be found in the next section.

The book begins with many reviews for many books by Mr Bagaria and a reader can simply skip to the main content if he or she does not want to know others’ opinions before reading the book oneself. Amit begins the main content in the book by telling about the main qualities of a spy and how a spy in real life is different from the spies we see on the TV and in movies. He has also discussed the major intelligence agencies in the world – 20 in total. Major of them are MI6, RAW, CIA, MOSSAD, FSB, MSS and many others. The agencies have been ranked by the author according to his own measures which are always up for dispute and conjecture. The author has also informed the readers about many secret and covert operations conducted by the various secret agencies that have been mentioned in the book. One thing that might surprise the readers of this book is the position that Amit has ascribed to Indian intelligence agency RAW. You will have to read the book to find that out.

I-Spy: A Peep into the World of Spies has come out as one of the leading and authentic books on the records of intelligence operations carried out around the world by the leading agencies in the world. There is mindblowing information – the longest chapter being the one about CIA and its (anti)heroics. About RAW, many people will learn many parts played by our own intelligence agency on various occasions – such as Sikkim’s merger into India, 1970s Pakistan infiltration, the downfall of Bangladeshi government in 1992 (according to the author) and many others. However, Amit has also introduced the readers to major setbacks that these agencies have received.

In terms of technical aspects, the book is written in plain, layman’s English and will easily be read and understood by any reader above 13 (but I would rather advise 17+ readers to read this book).

To conclude the review, I would certainly say that the book is a major achievement for the author. It is a very quality read that can be amazing at occasions and lacking (in terms of references at the end of chapters) as well. You can get a copy of I-Spy from Amazon India and enjoy the book by Amit Bagaria. Click the link below to buy the book:

review by Naman Singh for The Last Critic

NOTE: This book review is one of the reviews of the best books of 2019 (selected by the team at The Last Critic). Please read other reviews from this series (the best of 2019) by clicking on the links you will find the series box.

Buy Now
Post Series: Best of 2019
#Indian#NonFiction
Help others read this... do share!
You will enjoy reading these:

Good books are never out of fashion. These are, in fact, good all the time.…

Vivek Agnihotri is a very good filmmaker, director and thinker. He has proved the same…

The World of the Crusades by Christopher Tyerman – Book Review

There are many movies about the Crusades – an ideological and religious extension of Christianity.…