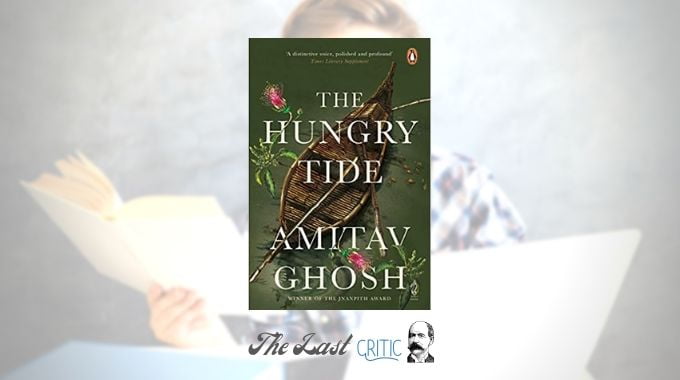 There are many incidents which we forget but when remembered, they bring a sweet smile on our face. When I think of how I got this book, I genuinely thank the bookseller for suggesting me this lovely title. It was somewhere in 2014, I don’t exactly remember the month but yes it was certainly in 2014 when on one Sunday, I went to the local book market to get some classics and mythological books. One of the shopkeepers suggested to me “The Hungry Tide” title. Till that time I haven’t heard much about the author, Amitav Ghosh, so I was little hesitant to buy that book, but he (the bookseller) insisted me twice and I eventually nodded my head in a yes after reading the blurb. I came home and arranged all the books I bought on my bookshelf as always. And soon I forgot about The Hungry Tide.

Then some days back, I came across a review on the same title, written by my friend. The review reminded me of the book which I accidentally bought. Inspired by the review, I took out the book from my bookshelf and finally read it. And after reading the book I was kind of overwhelmed. The book contains many things that pull your attention like –  who take out time to think about wild animals, who cares for the forcible eviction refugees or Adivasi and how do they manage to live their life without knowing their nationality…..

The meat of the novel is set around the period of MorichJhanpi Massacre in 1978-79 in the heart of Sundarbans in Bengal. This points out to one of the worsts human rights violations in post-independence India which led lives of hundreds of inhabitants and forced thousands of other islanders to move to other places. The characters are limited in the novel which makes it a pleasant read. There are three central characters and around them, the entire novel revolves. They are – Piyali Roy, Fokir and Kanani Dutt. Other than these three central characters, what is prominent in the book is the extremely beautiful landscape of Sundarbans, considered as one of the natural wonders of the world. And the way Amitav Ghosh has described the panoramic beauty of the island is splendid. I haven’t been to Sundarbans, but I could actually breathe it through words – the range of flora and fauna, the white tigers, the mud shores, the Sundari trees (mangroves)….The nature at the best! However, every year, heavy rains and floods, or say those hungry tides, actually swallow the calmness of the place and it begins to suffocate.

Let’s now talk about the storyline of the book. Piyali Roy, an Indo-American marine biologist comes to India to study the rare varieties of dolphins, Orcella, their habitat and behaviour. Orcella is popularly known as the cousin of killer whales. On the train to Sundarbans, she meets Kanai Dutt, a translator and an interpreter, who travels to Lusibari to visit his aunt and review a manuscript left to him by his late uncle. During her expedition in those magnificent islands of Sundarban, she meets Fokir, a native fisherman, who knows the region like a foodie knows the taste of every spice put in a dish. Fokir helps Piyali in her research by taking her to the portion of the ocean which inhabitant Orcella. As her research proceeds, silent love blooms between them. The love, unlike portrayed by Mr Chetan Bhagat, is beyond the boundaries of language, status, expectations and physical closeness. While exploring many events, Piyali and Fokir are surprised by an enormously strong storm. In the end, withstanding the tide, fierce rain and fate, Fokir sacrifices his life – saving Piyali behind his brave and strong arms. On the other hand, the character of Kanai Dutt portrayed as the male protagonist at the beginning is repressed to oblivion as the story progresses. He is limited to reciting (in a different way) the story of his uncle to the readers. There is a timeline into the past and there is a timeline that runs in the present times.

The book focuses on a wide range of themes including conservation, ecology, displacement, human trafficking, caste, and literacy. However, the limitations of the novel arise when the author denies acknowledging anything else other than what he fits deem according to his conscience and Amitav Ghosh has been wandering in and around West Bengal, that also Calcutta only. For a novelist of international repute, this doesn’t play fair.

The novel is for a very limited set of readers who can understand the literary significance of this very limited novel which moves on the path of storyline very slowly. If you want to read this work, you can get a copy from Amazon India by clocking the link below:

Buy the novel: click here to buy from Amazon India

review by Nidhi for The Last Critic

This is somewhat a slow but sure read if you are interested in reading novels that make sense other than making momentary scenes.

Post Series: Indian Authors & Their Writings
#Academic#Contemporary#Indian
Help others read this... do share!
You will enjoy reading these:

The Unproposed Guy is a novel that offers entertainment, excitement, an engaging storyline and a…