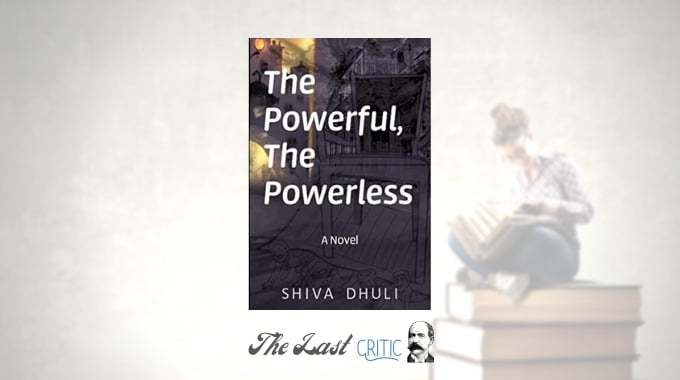 As soon as you utter the word India, what happens in your mind and heart? Though there are more than 1.3 billion people in India, most of us struggle every day chasing our dreams, trying to fulfil our aspirations, securing good fortune for our children and so on. And therefore, India or Bharat, to many of us and them, connotes a goose hunt, a search for balance, an unending race to perfection. Why these thoughts are coming to my mind? Recently, I have gone through a novel ‘The powerful, The Powelress’ by Shiva Dhuli. The novel has left me with lots of questions and never-ending thoughts that we have to conquer every day in our life. India, a cat race to chase our dreams, nexus of politicians, respectful life of the middle-class people and many more things has been explored by the author in the novel. Though I instantly recommend this novel to all the readers who are looking for something serious, something different and something meaningful, I would like to draw the attention of the readers of Indian English to a few points that I will make below. So, let’s get into the review of this novel, The Powerful, The Powerless by Shiva Dhuli.

The story is simple, realistic and instantly relatable to our lives. The central protagonist of the novel is Bharat who hopes for a better life in the entire novel but unfortunately ends in dismay, hopeless and unfortunate situations, almost every time he aspires for change and something better. The novel begins with his life and moves on with his story. He always remains the central figure of the novel. His journey from an undeveloped village to a megacity comes up with lots of unexpected events and by such details, the author tries to show the cruel side of society where most people live in a big city or even the slum areas in such cities but lead a very individualistic life with ‘nothing concerns me’ attitude. However, the protagonist, Bharat, somehow comes out of such a mirage and joins a college as a lecturer where he meets Sitara, and eventually falls in love with her but fails to convey his feelings to her… unfortunately. And then, the political class comes behind Bharat, and the attack is led by a certain politician and the CM Kansakumar. Murders, charges, allegations, prison and torment…

The novel has wonderfully illustrated the in-depth details of poverty, slum areas and their problems from both sides, political nexus and corruption in the system, and the hindrance that common people have to face if they dare to go beyond their supposed limits. Everything in the novel, or most of the things, are alluded to grand sources such as democracy and politics, the common man and the idea of a nation, getting to the heights and then meeting people who have been left behind, chasing dreams and facing obstacles, trying hard to make changes happen but changing alongside… Shiva Dhuli’s novel The Powerful, The Powerless presents an apparent contrast between those who rule and those who are ruled. The politicians who are there to serve people are misusing their power and involved in many illegal practices. The factory owners torture children at the age of studying. At the end of every page, the readers will naturally sympathise with Bharat. He tries hard to fulfil his dream but every time settles with broken dreams and a heavy heart. He has always been the victim of shattered dreams, broken hopes and unsettled life.

The journey of Bharat metaphorically signifies the journey of India. Crumbling, hopeless and powerless most of the time. A section of people enjoys being powerful and a vast majority is powerless. The journey of Bharat from dark to bright with the hope he can settle with her colleague and the unfortunate incident of her murder depicts the harsh reality of society. Being true, honest and having proofs and facts are not enough to stand against a strong man who runs the government himself. There is a nexus of media, policemen and politicians… In short, a predicament where you can not trust anybody but somehow in the honourable courts… Well, this symbolic gesture by the author to exhume trust from the entire system and ascribe it in plenty to the courtrooms seems problematic. We have been courts being partial, lopsided and biased on many occasions. Though the author tries to symbolically present India’s worst, he somehow doesn’t depict the other side which is bright, if not the brightest.

Well, to cut things short and to end this book review, I will accept that Shiva Dhuli has hit many things right in his work. He invokes sympathy and pity, he entices the readers and he is successful in leading them to finish the novel. The author has explored the widespread problems in our society that creates hindrance in our life despite being true and honest. I like the way the author has developed the characters. Bharat can be seen as the only protagonist and Kansakumar as the single antagonist of repute. Though there are other characters and most of them, except Sitara, are rather passive. The author also (probably) hints that despite being in bad company, Bharat never chooses to be one of them. Whereas his friends from the slum area have been indulged in rape, kidnapping and loots. What do you make out of it?

The novel could have been better if the author has tried to provide a possible solution to those problems. However, we cannot expect a novelist to write a moral story or a political science textbook. If the readers are in to read a 335-page long novel, they will find it interesting. I cannot say that The Powerful, The Powerless will be entertaining because it is not. It has been written in a standard language, the story moves at a slow speed and events unfold slowly. However, at the centre of everything, the novel offers many interesting messages and one must note that the novel provokes you to think rather than being all thoughts. Would you read such a serious work? Well, YOU MUST! Try it and encourage the author for doing such a great job in his very first attempt!

Review by Ashish Mishra for The Last Critic

The Powerful, The Powerless by Shiva Dhuli – Book Review

The Powerful, The Powerless by Shiva Dhuli is a novel that will encourage you to question what you see around yourself and also what you find within yourself. A political satire, a social tragedy and a realistic novel that poses alarming questions in front of the readers.

There are many incidents which we forget but when remembered, they bring a sweet smile…