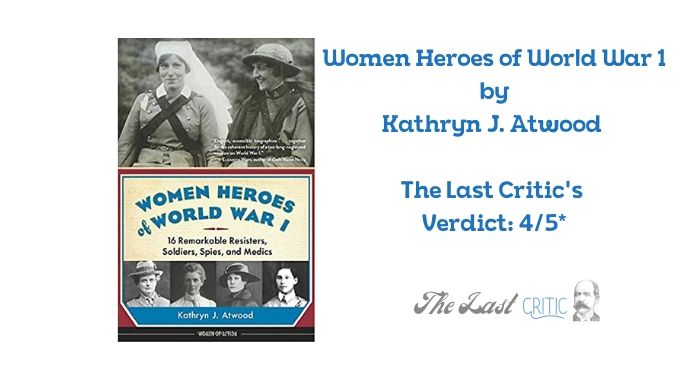 Good books are never out of fashion. These are, in fact, good all the time. With time, I must rather admit, the good becomes better and eventually better and better… I came across one such good book recently – Women Heroes of World War 1, written by Kathryn J. Atwood, an author from Chicago. Well, I do have a little difference with the title’s choice made by Kathryn – why does a woman need to be respected with a title that is for men? However, leaving these silly whatabouteries behind, let me get to the main agenda of my writing. I will be telling you what I found in this book. Here is my review for Women Heroes of World War 1.

There are four parts in the book that include these 16 women heroes of World War 1 (1914-18). The author has divided her book into four parts based on the roles these 16 women played – resisters and spies, medical personnel, soldiers and journalists. The book has 256 pages and, as the author promises in the introduction, the book is fast, quickly moving to the core of each of the chapters (based on the women heroes). So, the readers can enjoy this book and know about the women who made strong impressions in the (un)fortunate war.

The book is indeed a near-worthy testimony to the courageous women who stood up for their countries in the times of war. When the first World War gripped the world as fast-spreading diarrhoea, there were the people who rose to speak against it; at the same time, there were the people who construed the occasion entirely differently and stood up for their nation and national pride. Women Heroes of World War 1 celebrates the women who stood for their country and contributed their best (possible) to the glory of the nation. Many faced bullets and many used bullets.

“Ecaterina answered that yes, she had food—but it was not for herself; it was for the Germans. She showed him her bag: it was full of bullets.”

Ecaterina Teodoroiu, a soldier for Romania in World War 1, told this to her companions when asked what was she carrying with her to the war. Kathryn J. Atwood has written about the 16 Bravehearts who did what the could for their nation when it was the call of honour. And I must mention the names you would love to read about – the ones who sacrificed all they could – and the ones who did all they could. In fact, all the 16 women are worthy enough to be read but you can like reading some depictions more than others. I will name all the brave women mentioned in the book: Edith Cavell, Louise Thuliex, Emilienne Moreau, Gabrielle Petit, Marthe Cnockaert, Louise de Bettignies, Elsie Inglis, Olive King, Helena Gleichen, Shirley Millard, Maria Bochkareva, Flora Dandes, Marina Yurlova, Ecaterina Teodoroiu, Mary Roberts Rinehart, and Madeliene Zabriskie Doty. Two of the last were journalists. 4 before the last two were soldiers. Four before the soldiers’ name were medical personnel and all above those were resisters and spies. In those days, you can understand how difficult for these women the war may have been!

On the technical front, the book is sound and Kathryn has been sound and almost complete, all the time, in her narration of the events and timeline related to her subjects and the brave women. As a reader, you will like reading this book which may be surprising because, most of the times, reading a non-fiction book in war genre is often complicated and an exercise which demands more concentration. This will be an interesting experience – on the contrary.

However, there is another side to the narrative as well. The author seems to have an axe to grind against Germany and she has the right to do so. However, there were many women in Germany who gave it all to the war and they could also have made great names on the list! This was not the fault on the part of the women – it was Germany’s leaders who took the decision to be on the wrong side of the history and now, it is our fault that we deliberately ignore all those who might be on that side by compulsion and not by choice!

The book is indeed interesting and the readers will enjoy it. It is not a novel but maybe far more interesting than the usual romantic novels youths read these days. There are biased faultlines in the thoughts of the author that do not allow her to make certain inclusions but whatever she has done has some weight and it will make the book a worthy read! You should go ahead and read this book if you want to know about these 16 women who were really the heroes of World War 1! You can buy the book by clicking the link to Amazon below:

review by Gaurav Shashi for The Last Critic

Buy Now
#NonFiction
Help others read this... do share!
You will enjoy reading these:

Vivek Agnihotri is a very good filmmaker, director and thinker. He has proved the same…

The World of the Crusades by Christopher Tyerman – Book Review

There are many movies about the Crusades – an ideological and religious extension of Christianity.…