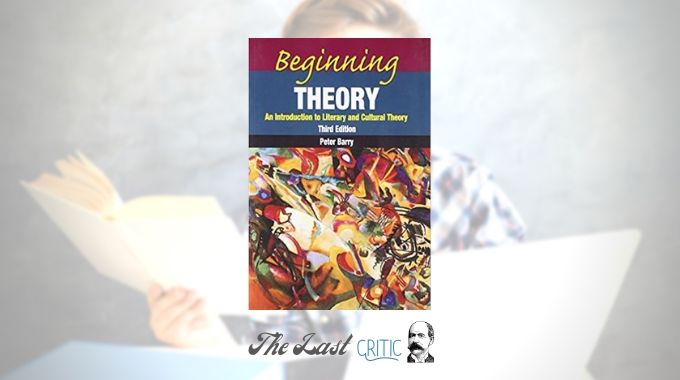 I would not recommend any other book for the beginners in literary theory (a part of English literature studies) instead of a wonderfully written book on this subject by noted literary personality and professor of English literature, Peter Barry. Peter’s book is an ideal beginning for any student who wants to test his footfalls in literary theory and criticism. Beginning Theory is an ideal book for beginners not only because the author has written it in a simple language but also because it contains no more and no less than what a beginner might need. It is appropriate in terms of quantity (hypothetically) and quality at the same time. And I am not the only one who is praising this book. Many scholars, literary critics and also noted literary influencers in the country have praised this book openly.

Beginning Theory is a book that wonderfully presents the world of literary theory and criticism to the students of English literature. It makes the difficult task of understanding, learning and then teaching literary theory to the students very easy so that anyone can have a go. Right from the beginning, the very first chapter, Peter has ensured that the readers get the best possible information in the simplest possible way to learn what is the maximum possible. I have read many books on the same subject and to name a few, Patricia Waugh’s and Raman Selden’s names and their books come to my mind. I hope the readers of this review will be well introduced to the names I have mentioned. These authors have done well as far as it’s about writing on the topic of literary theory is concerned. However, to be honest, these authors have, perhaps, perceived their audience in a very wrong way. They have written their books in a way that these works will be understood only by those who are already well-versed in the basics of literary theory and criticism. A beginner would only find him or herself baffled by reading those works. Erudition is at the full display while simplifying the elements for beginners to learn takes the backseat.

In the book by Peter Barry, Beginning Theory, there are 15 independent chapters other than the introduction and various appendices. It is also to note that the author has given an honest list of books that students can study for a further and intense understanding of literary theories after reading this book. This has to be praised and appreciated. What I liked the most in the book by Peter Barry is that he has made it really simple for the students to understand what a particular theory means and what the theorists practising a particular theory do when it comes to applying that certain theory to analyse and critically interpret a literary text. No other author has tried something like this in any of the books published previously. And therefore, all those who want to understand various literary theories in their basics and understand how the theories in action work, have to read Barry’s work, without any second thoughts.

Yes, it can be argued that the book does not take the readers to the no man’s land of absurd whataboutery and conjectures of literary theories. For example, the book will simply put it out what a theorist indulged in ecocriticism will do with a text rather than trying to overly intellectualise the actions or the thoughts to an extent that it would become difficult for the readers to come to the point where they can actually understand what the critics actually do… it gives another green signal to the beginners that they need to choose this book other than any other title, whatsoever!

You can get a copy of this wonderful book from Amazon India and begin studying literary theory and criticism in the most basic format. This book has been recommended by the literary theory experts in India like Alok Mishra and others. So, you are in a good company already! Just read it and begin your journey into the simplified world of theories rather than an implied world of nothingness. You can buy the book by clicking the link to Amazon India below:

review written by a contributor to The Last Critic

Unmatched, this is a book that is the best when it comes to understanding literary theory and criticism in its basics. You should instantly get a copy of this book if you are also a beginner in theory and criticism, a part of your English literature course.

Post Series: Academic Books Recommendation
#CourseBooks#NonFiction#Suggestions
Help others read this... do share!
You will enjoy reading these:

How to write a research paper? How to begin writing a thesis? Why are illustrations,…