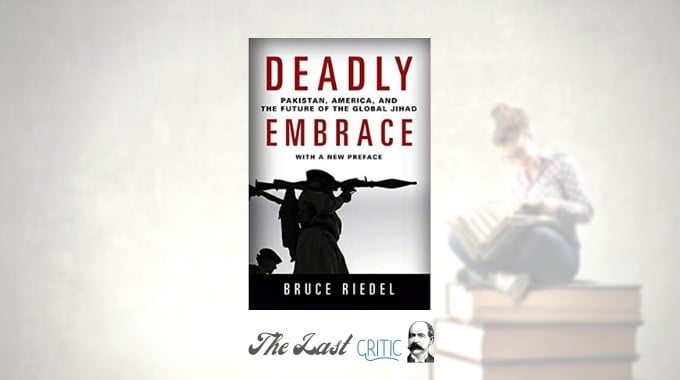 Reading political books, books on foreign policies or bilateral relations between nations, global socio-political issues or anything that concerns nations, international politics or global issues might not be an interest for many readers. This may be because things get too complicated at times to be understood in bare terms. However, when it comes to Pakistan, a nation and an enigma, a book can certainly draw some inspiration out of any reader who is even a little interested in such things. Bruce Riedel’s works are popular among those who observe terrorism, terror outfits and the war against it. I got a chance to read his book Deadly Embrace: Pakistan, America and the future of the global jihad. Though the events, timeline and many other details in the book may be a decade old where it ended at that time, the analysis of the events, observations made by the author and his sense of historical facts are very much relevant and useful for anyone who wants to understand the problems that Pakistan faces as a nation and the problems Pakistan poses as a nation.

“Pakistan itself has been wracked by terror and militancy in the past few years. From one end of the country to the other, mass casualty attacks occur almost daily. Ironically, many of its terror groups have long-standing ties with the Pakistani army and its intelligence service, making Pakistan both a patron and a victim of the Frankenstein it helped to create, which may eventually destroy it.”

These sharply written sentences appear in the preface itself. You can understand the critical observations made by the author. A former CIA officer, Bruce knows what he’s telling his readers because he may be privy to many things that we are don’t see from the outside. The book has seven chapters with a very splendid preface and a dedicated timeline that will tell the readers about various terrorist leaders, terror organisations’ activities and leaders in Pakistan. The book deals with regimes, Osama Bin Laden, the present (of 2010 and before) Pakistan and its implications on the world.

The author also raises questions on many aspects that the readers will certainly find new in the context of Pakistan and America’s relationship. There are many things about Muhammad Ali Jinnah, the supposed founder of Pakistan, that will shock the readers. There are many things that will surprise the readers in general as they deal with Pakistan’s constant refusal to look at the problem it is standing on and its perennial desire to wage a war against India in spite of defeats on all occasions. The author also raises questions on America’s possible foul plays at times that might have been for temporal political and international supremacy but, in the long run, went bad, worse and worst.

As a book on the international problem of terrorism, the book has something to offer. Though it does not state many aspects and discuss those which might further throw light on how Pakistan has been used by vessel by powerful countries, America mainly and China, to accelerate the agendas and decelerate the same – you can understand what I mean if you observe international trends.

The one thing about the book that I liked the most is that it does not bore you as a reader. Even if you are not interested in these issues, you will find the book exciting because of its analysis of such issues. The memorised version of the narrative makes the book read like a story of subconscious unfolding in front of you… you can read it to understand many things about Pakistan in the early 21st-century, just after its birth and even before it – in the context of terrorism that it synonymizes these days!

If you are interested, you can get a copy of this work from Amazon India by clicking the link below:

Buy the book – click here to get a copy

Review by Madhav for The Last Critic

Deadly Embrace: Pakistan, America and the Future of the Global Jihad by Bruce Riedel – Book Review

Deadly Embrace: Pakistan, America and the Future of the Global Jihad by Bruce Riedel is a book that unfolds many factors about the rise, development and abuse of terrorism in Pakistan – but itself and others.

#History#NonFiction
Help others read this... do share!
You will enjoy reading these:

In the Sphere: Amit Bagaria's books have certainly rocked the past year, 2019. Mostly, his…